Welcome to Trafalgar’s weekly page. This we have worked hard on presenting well-organised work and below you’ll want to see them, so please go ahead and enjoy reading our work!

Following on from our achievements in maths, we have also started reading some Greek myths and with the inspiration of them, we wrote our own myths. We have used many techniques to really make it sound real and we would love for anyone to come and read them; you are more than welcome to come.

As well as bringing our imaginations to live in our writing, we have also discovered many historical backgrounds about the Trojan war. The Trojan war occurred in ancient Greece in the city of troy. There was a young prince named Paris and he was told to choose between 3 goddesses. He chose one who gifted him the most beautiful woman in the world ( helen). But, unfortunately, she was already married to someone else. So, when they fell in love with each other, they both ran away back to troy. But, it didn’t end there, king Melenaus ( helen’s husband) was furious and decided to come back for her. Eventually, there was an enormous battle against the two cities for 10 years . at the end, king melenaus won and everyone in the city of troy died, including prince Paris. We have discovered and explored many greek myths and enjoyed listening to them.

By Sathani and Angel (Year 6, Trafalgar)

This is all the work and effort of all students and teachers to make Trafalgar class a better place.

In maths,Trafalgar class has been learning about fractions. Before we all started fraction, we all did a test about fractions that we did last year. Did you know that 1 half as a decimal is 0.5 ? We now know that we can simplify fractions eg . 24/36 is 2/3 of a fraction. We even made our own mixed numbers and coloured them up.

In topic we have been learning about the Greek gods. Here are some facts we found out:

Our new book is:

The adventures of Odysseus

We also read the “Perseus and Medusa” myth. Here is a summary:

The king’s daughter was going to have a son and it was going to be the end of the king. When the king’s grandson was born, he ordered his daughter and grandson into a large wooden chest and sent them to the ragged sea. After days passed, a kind fisherman pulled the chest out of the sea and helped the baby and daughter. When he was older, the boy (his name was Perseus) went to the evil king’s palace because there was a party. Everyone gave the king lots of gifts but Perseus’s didn’t have a gift for him . The evil king caught the eye of his mum and wanted to be with her. Perseus came up and said “I will give you anything but not my mother”, the king answered “I want Gorgon Medusa’ head!”

The story carried on and we even wrote our own version of this myth in our books.

This is all of the work and effort that the students and teachers have invested to make Trafalgar class a better environment:

THE SCHOOL TRIP TO KENSINGTON PALACE:

The children in year 6 were set a task of completing a question sheet about Queen Victoria at Kensington Palace –that will be useful later in their massively interesting history lessons. The reason that year 6 went to this majestic palace was so that their literacy work could continue as they are reading a book about young Victoria’s sad but very true life. We believe that the hard working pupils really enjoyed this historical adventure and can’t wait to go on their next one.

THE SOPHISTICATED SUBJECTS IN YEAR 6:

Year 6 are reading a true story about young princess Victoria. Based on their book dubbed “My Name Is Victoria” they have been writing recounts and newspaper articles. Here is an example of their work: 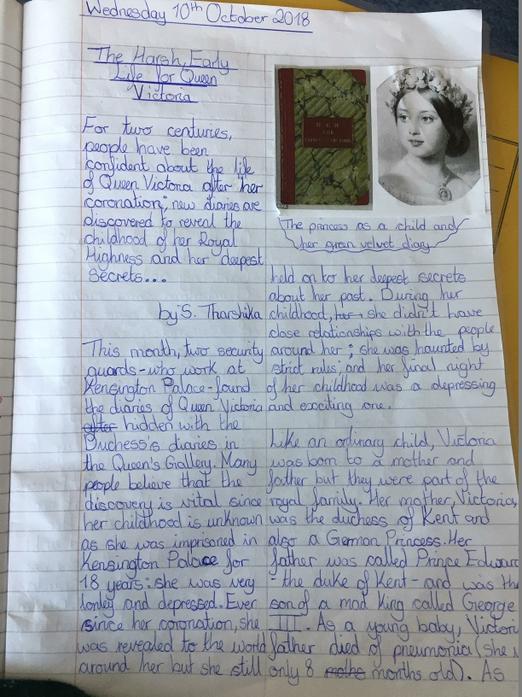 Finally, they love art in Trafalgar class. They have been drawing some one-point perspective drawings; please visit our amazing work page to see some fantastic efforts.